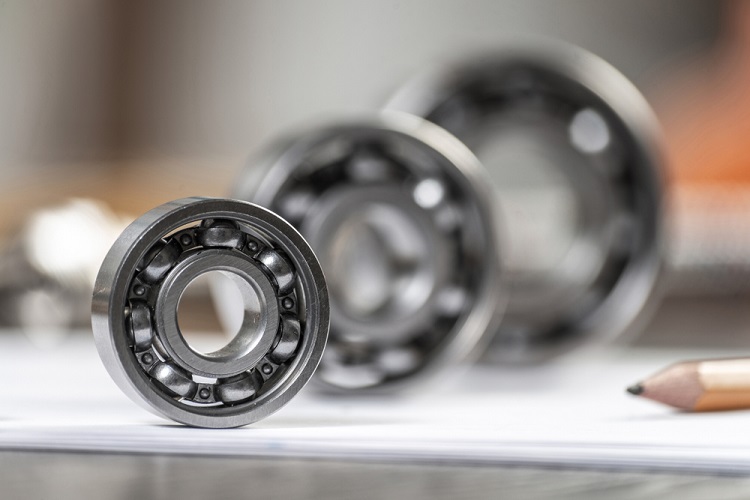 A bearing is a machine element that constrains relative motion to only the desired motion, and reduces friction between moving parts. The design of the bearing may, for example, provide for free linear movement of the moving part or for free rotation around a fixed axis; or, it may prevent a motion by controlling the vectors of normal forces that bear on the moving parts. Most bearings facilitate the desired motion by minimizing friction. Bearings are classified broadly according to the type of operation, the motions allowed, or to the directions of the loads (forces) applied to the parts. In this article you will find more things to know about the bearings.

Rotary bearings hold rotating components such as shafts or axles within mechanical systems, and transfer axial and radial loads from the source of the load to the structure supporting it. Linear bearings (also called bushings) hold components in linear motion systems whose axes are too long to be supported by rolling-element bearings.

Plain bearings, including flat bearings, thrust bearings and washers. Ball bearings use balls to maintain separation between moving parts of a rotating assembly. These balls can roll between two tracks allowing for very low friction movement. Roller bearings use cylinders (rollers) instead of balls for rolling elements. They can accommodate both heavy radial and thrust loads at moderate speeds.

Bearings are mechanical assemblies that consist of rolling elements and usually inner and outer races which are used for rotating or linear shaft applications, and there are several different types of bearings, including ball and roller bearings, linear bearings, as well as mounted versions that may use either rolling element bearings or plain bearings.

The ball bearing is the most common kind of bearing. It has a metal cage that holds and guides a number of small steel balls, which roll between the inner and outer races, reducing friction. Ball bearings are used in applications where there is low thrust and high radial load.

Needle roller bearings have high load-carrying capacity in a small space. They can be used for applications with thrust loads or where shafts are too small for ball bearings.

Plain bearings (also called bushings) are used to reduce friction between moving parts when there is low speed and high load. The bearing has no rolling elements and uses a smooth metal surface to reduce friction between the mating part and the bushing. Plain bearings can be made of metal, plastic, or composite materials such as bronze with a Teflon overlay. Get detailed information about mechanical education, on this website: www.blogcabinca.org

The bearings used in the drive systems for many small appliances and power tools (e.g., electric motors) are typically radial ball or thrust bearings. These are designed to carry the axial loads generated by the shaft spinning, but not large radial loads. The rolling-element bearing, such as the ball bearing, has a dual function of supporting both radial and axial loads. Ball bearings used in most electric motors are pre-greased, sealed, and do not require frequent lubrication or maintenance. In applications that use extremely small bearings, oil bath lubrication is used because grease would attract dust particles which could enter the bearing and cause failure.

In larger industrial motors that may have shafts greater than 50 mm diameter and/or may be used in dirty areas or where there is high humidity, oil mist lubrication is also used. This system replaces the air around the rotating shaft with oil mist to prevent contaminants from entering while circulating oil through an external pump to keep it cool. The oil mist is created by forcing compressed air into an oil reservoir at supersonic velocity through a series of very small holes (less than 0.5 mm). This creates an oil mist that can be injected into the motor housing around the shaft seal. Oil mist systems generally require filters Get detailed information about basic repairing skills, on this website: www.firstreporter.org